Tax brackets is a term used by accountants and other financial professionals used to describe the levels of which you will be taxed on.    Or, what category of tax you will be.    We at pay stub direct, have tried not only to make great looking paystubs, but, have created a blog series to educate and have paystub tax brackets explained, amongst everything else explained about the common paystubs

Everyone is taxed that works in this country, but, not all at the same level.    This is based on a percentage of your income, and some are higher and some are lower.    There are many factors, but, primarily, it's your living status, like Married, couple, single, head of household, etc.   and the other part is, how much you make.

Usually states tax people at a higher percentage if they make more.   Which is hugely unfair.

We all must pay taxes, and do all our share of work, and if you make more, your share will be larger than the person making less, but, it shouldn't be different.

Saying this another way, is comparing two neighbors that both have pools in their backyard,   One is 2x as big than the other.    So, in a fair world, the bigger one should accept 2x the amount of kids.     If all other things are equal.

It is fair to say, that both pools are handling what they can handle,  yes, the bigger pool has more kids, but, based on it's size, it can handle the extra kids because it's extra big.

Therefore, it would be "unfair"  to say, that the bigger pool, should take on even MORE kids than the smaller one,  basically, the bigger pool will have to work harder to handle the kids.   Which makes the owner think, I should never have gotten a big pool, there are way too many kids here.

Of course, the kids don't think it's unfair, because they're happy to be in a pool.  Until they grow up, and then get their own pools, and realize they don't want the burden of having all the kids in their pool.

That's how our government works,  it punishes someone for getting bigger, or doing better,  by taxing them more.   In essence, it's smarter to earn a bit less, because you won't be taxed as much.

The POOL's themselves would be considered as tax brackets.   small tax bracket and big tax bracket.   In the tax world, there are multiple tax brackets.   The federal tax is usually about 5-6 brackets, or pools,  and states range from ZERO to 8-10.

It's wise to know which tax bracket you are in, and how much money you're going to make this year,    if you see yourself approaching the next bracket, it might be wise to slow down, and not work so hard, because you'll be taxed at a higher level.   You will in fact, earn less if you work more

But, let's say you wanted to work one saturday, or stay in the office late one night.  and you made an extra $5.

Basically, for working a little extra, you are going to make 10,000 less than the other guy, who didn't work extra.

That's just stupid, anyone will call you crazy for doing that, and you'd have to be crazy to do that.   it's silly, but, that's how the Tax bracket system is setup, so, you are truly punished for working extra.

Can you now agree that this system is unfair, and need to change.

Detecting the difference between a copy and the real thing is very easy, if you know what to look for.   Just like fake merchandise like watches or name brand purses, the devil is in the detail.    We'll go through a few items that I would look for if I were presented a pay stub and show you how to spot a fake paystub

1)  General look of a pay stub.   It doesn't have to be "pretty"  per se,  with fancy fonts, or logo's etc.    But, it has to look official, which, coming from an accountant, usually means readable, organized and square/robotic  if you know what I mean.   Fancy or neat fonts are not readable by computers or people from different parts of the world.   So, paystubs truly have to be bolcky and obvious as to what is being displayed.   It's not good to be non-discernable between an "o"  and a "zero".   Usually they have a dot, or line through it denoting the number

2)  All digits have to line up.   and the Decimal points as well.   If this is not the case, it's most certainly not a real pay stub,  as accounting departments love colums..  like their programs such as Excel, or Quickbooks.   It has to be organized.   It's just numbers..

3)  There does not necessarily have to be a $ sign if front of the numbers.   Maybe on the Check itself, but, not on the paystub..  it's just a numbers thing usually.   The Decimal is Key.   They love every penny, and will account for each. 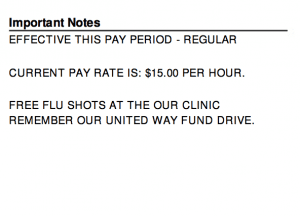 4)  The math has to make sense, but, it doesn't have to be the same for every paystub.    If you get paid weekly, you may or may not get charged the same fees and taxers each month,  like your SS, or Fica, or perhaps your garnishments.    Plus, sometimes, accounting departments make adjustments.

5)  You get taxed based on your projected yearly earnings, but, those may change..    Maybe you worked overtime in your last month of the year, or you took off the month of June, or you got fired in September.   So, your taxes deducted from your check are just an ESTIMATE.   That is why we all have to file our taxes at the end of the year, to nail it down, and you may need to pay, or be paid from the government due to Overpaying or Underpaying.

6)  There is no one "standard" pay stub, but, they all have similar qualities, and are generally the same.   Payments, Deductions and special issues.   Plus, bigger companies do communicate via your paystub, because everyone looks at it.   Legitimate paystubs will have all that.

7)  There is always a part that is either torn off at the bottom or top.

8)  If not 7, then check for the words DIRECT DEPOSIT, or something to show where the check went

We pride ourselves in making very authentic and professional paystubs.   Check out the FREE preview before you buy, and test it for yourself.

I'm sooo frustrated, and upset about the fact that some states have don't separate set of tax brackets for single people and couples.    it's as if they're punishing you, or assume that you're both working.    Isn't the whole point of being a couple that you can divide your resources, and that one of the people don't have to work?

Let me say this in a different way.   Let's take California Paystubs, or better said, California state tax.  look below:

If you're single, you'll be paying 2% of your income, solely for california state tax, that's $200.    But, then you decide to get married, and your partner wants to stay home with the children, as usually the reason to be in a marriage, and you still only earn $10,000, you will only be taxed at 1%,  which will be only $100.   Thereby decreasing your tax burden by half.

Which is how it should be, the law should promote living together, and being happy, and creating families.   This is why I don't understand states like W. Virginia, which only has one pay scale, no matter if you're in a couple or Single status.   You have 2 mouths to feed, or most likely more, again reasoning to become a couple, and you're still taxed at the same rate.   even though the other person isn't working.

That seems anti family to me..